Tips For Tuesday - See It Write It 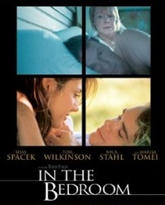 Last time I told you my view of the creative evolution when it comes to writing a film: Idea – Story – Screen Story – Screenplay.  In doing so, I explained the difference between idea and story.  This time I want to move forward with those last two.

Whenever a writer gets an “idea” and turns it into a “story” by adding characters and plot, he or she then has to make a choice about the best form of telling that story.  For instance, if there are few characters and limited locations and the story will be told principally through dialogue, it may be best for that to be expressed as a play.

On the other hand, if the story is going to shift perspectives, span great lengths of time and rely a great deal on internal dialogue or narration, then that story is probably best expressed as a novel.

For a story to be good fodder for a film, it should rely heavily on visuals.  The narrative should be told in images and actions, the latter not being limited to just explosions and car chases.  “Actions” means people (characters) actually doing things, big and small.

Now we all know that plays and novels have been adapted for the screen.  However, to do so, the writers of those films had to make changes to accommodate the requirements of action and visuals.  And that’s what I mean when I say the next step after story is screen story.

If you have an idea and you envision it as a film, you must start to “picture” your story.  As we all know, a “screenplay” is a series of written scenes that when read in order tell a story.  Before you rush your story into a screenplay, I believe you must think of your film in visual terms.  To help you begin to do this, think in terms of the “events” that must take place in the telling of your story.

While a screenplay is an actual document, a physical thing, a screen story is not necessarily so.  Some people use the term “treatment” when they think of screen story.  A treatment is a document or physical thing.  While this is not so entrenched as a screenplay in terms of form, a “treatment” generally is a narrative which lays out the story, without dialogue, emphasizing those “events” I just referred to.  Except for the lack of dialogue, a treatment most resembles a short story.

Some writers feel it is absolutely essential to write a “treatment” before writing their screenplay.  I believe that what they are really saying is that one must envision and plan out the story in visual terms (i.e. those events).  However, that doesn’t mean you have to write out a document called a treatment.  Instead, you can simply outline.  That outline is just for you, the writer.  It requires no specific form.  It’s done simply to help you begin the process of writing the screenplay.

I’m not a big fan of treatments.  I think there’s too much emphasis on creating a formal document, and that inhibits creativity at a point in the creative process where flexibility is key.  By just creating an outline, you can delete or add and not worry about who’s ever going to see it.  Some in Hollywood like treatments because it gives them an idea of what the movie might “look like”.  Others in Hollywood will ask writers to create a “beat sheet” before writing the script.  A “beat sheet” is something more than an outline and less than a treatment.  But again, it serves the same purpose.

One good way to exercise your muscles in this regard is to look at a film that was based upon a play or novel or short story and examine how that source material was adapted it into a screen story.  One good example of this would be the short story “Killings” by Andre Dubus which was adapted into the film In the Bedroom.  While the former relied heavily upon narration and internal dialogue, the latter was most definitely a story told in images and action.

So in closing, it is incumbent upon you to visualize your movie before writing your screenplay.  See it first.  Then write it.
copyright all rights reserved by DREW YANNO at 10:04 AM

DREW YANNO
grew up in upstate New York and practiced law in Boston before turning to screenwriting. In 1995, his script No Safe Haven sold to Universal Studios after an eight hour bidding war. Drew went on to write a number of scripts, both for hire and on spec. In 2000, he founded the screenwriting program at Boston College where he taught for eleven years. He is also the author of two novels. 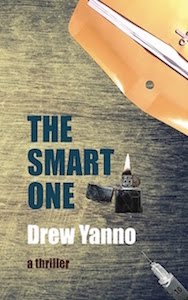 Drew's latest thriller THE SMART ONE was published in October of 2016 and received a starred review in Publishers Weekly which referred to it as "an (o)utstanding Hitchcockian thriller."

IN THE MATTER OF MICHAEL VOGEL 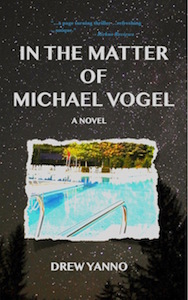 Drew's first novel IN THE MATTER OF MICHAEL VOGEL was published in 2013 and was a best-selling historical thriller in the Kindle store. Kirkus Reviews called it "...page turning ...unique ...(a)n ambitious, cleverly plotted thriller."

THE 3RD ACT - WRITING A GREAT ENDING TO YOUR SCREENPLAY 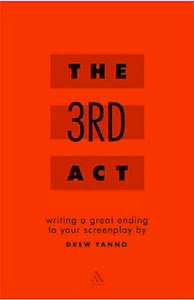 THE THIRD ACT was published by Continuum International Publishing Group in 2006. The second edition was released in 2016 and remains the only screenwriting book dedicated to writing the ending of a film. For more than ten years, THE THIRD ACT has received praise from countless screenwriters, producers and novelists. 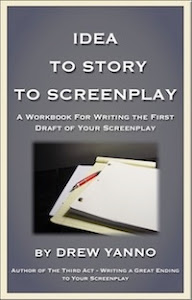 Drew's workbook IDEA TO STORY TO SCREENPLAY: A WORKBOOK FOR WRITING THE FIRST DRAFT OF YOUR SCREENPLAY is based on his popular screenwriting classes at Boston College and was released as a Kindle e-book in 2012.